Our current state of extreme divisiveness didn’t start under the current presidency, but it has certainly intensified. The accelerating polarization we are experiencing is not just something we feel and believe to be true; the data show that the divisions between Republicans and Democrats grew during Barack Obama’s presidency and that the division has only worsened under Donald Trump’s presidency.

Political scientists, electoral reformers, economists and legislators are all coming together around a simple, viable and powerful electoral reform solution —  ranked-choice voting.

Ranked-choice voting goes to the root of the problems of our outdated and failing two-party system, which has led to an unprecedented era of division, hyper-partisanship, and gridlock.

A simple and doable change

Allowing voters to rank their preferences is a very simple and doable change that has the power to transform our democracy for the better. It eliminates the dreaded spoiler dynamic, leveling the playing field for all candidates. It makes elections more competitive and civil, and winners take office accountable to a broad swath of voters, not just a narrow base. Their re-election depends on their ability to build consensus and make policy decisions on behalf of more voters.

As this chart — prepared by business leader Katherine Gehl and Harvard economist Michael Porter — shows, consensus on major policy has virtually disappeared. In essence, there’s no relationship any longer between what the public wants and legislation that gets passed. 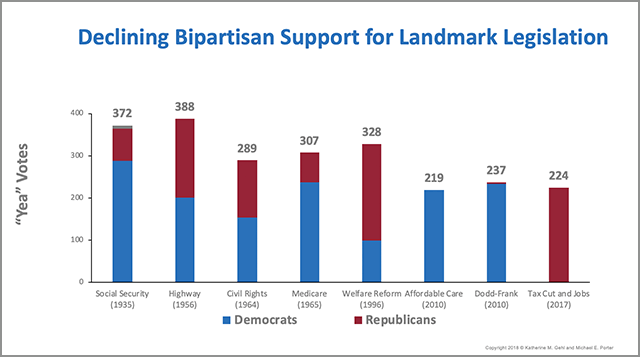 I believe that most elected officials take office with an earnest desire to serve and to make laws on behalf of a majority of their constituents. Instead, the system requires them to respond to their caucus over their constituents and spend most of their time raising money, which perverts their intentions by robbing them of their time and in clouding who they feel accountable to.

So let’s give them — and voters — a system they/we can thrive in, for the sake of our democracy.

In his new book, “Ill Winds” author Larry Diamond adeptly illustrates our current democratic crisis and what we can do about it. Diamond, a Stanford University professor, will join us here in Minnesota to help detail why ranked-choice voting is at the top of his reform list — calling it the “master reform, the reform that can break the logjam on all the other reforms.”

Ranked-choice voting is used in dozens of cities across the country, with several more on the way. Maine uses it for state and federal elections—and for presidential races starting next year. New York City is poised to pass ranked-choice voting this year. In Minnesota, it is thriving in Minneapolis and St. Paul and debuted in St. Louis Park on Tuesday. Several other Minnesota cities are right behind, and legislation is advancing to give all local jurisdictions the choice to adopt ranked-choice voting if they wish.

In Minnesota and across the country, the time is now for a new era of democratic reform. Ranked-choice voting is leading the way.

Author and Stanford professor Larry Diamond will be at Mill & Main West in Minneapolis on Nov. 14 at 5 p.m. For more information, see https://fairvotemn.org/events.

Jeanne Massey is the executive director of FairVote Minnesota.

END_OF_DOCUMENT_TOKEN_TO_BE_REPLACED

DFL may go big, and that wouldn’t be bad (Star Tribune)

I've been listening for one word — "overreach" — in the early days of the all-DFL production that opened last week at the State Capitol. Use it in a sentence, you kindly ask? Here you go: "DFLers had better be careful not to overreach on spending (or taxes, or guns,...

END_OF_DOCUMENT_TOKEN_TO_BE_REPLACED

Last month, Minnesotans again led the nation in voter turnout. The state’s strong performance is one measure of civic success, but in others Minnesota still has room for improvement. Here are some areas the new Legislature should prioritize that would strengthen our...